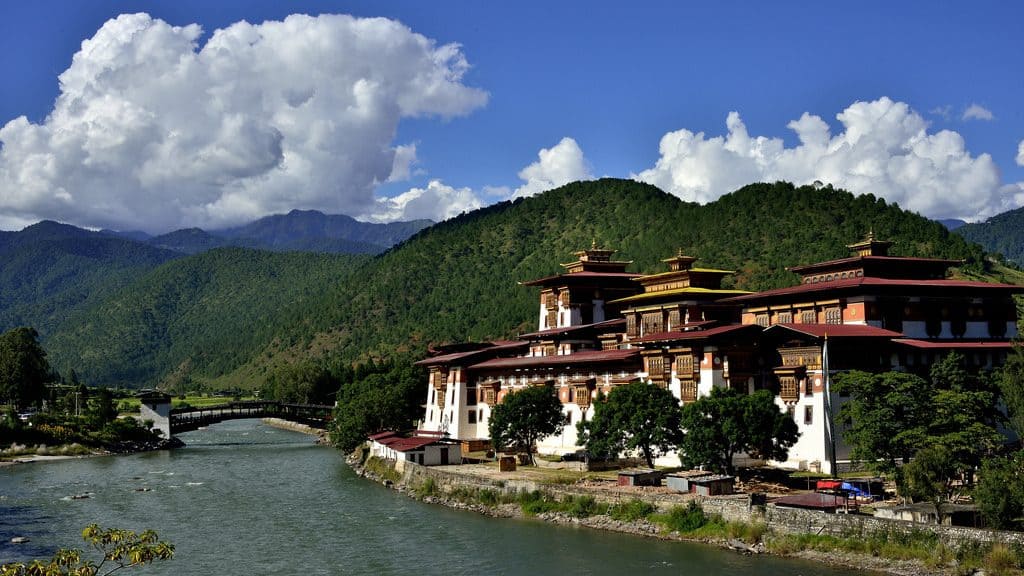 The Phobjikha Valley Trek is extremely popular and also part of the Gangtey treks that are avidly promoted by the Bhutanese Government as part of ecotourism in the beautiful Kingdom of Bhutan.
Phobjikha also known as Phubjikha in the past, with kha meaning valley, is the starting point of this adventurous trek. The trekking trail takes you through the splendid U- shaped glacial valley which lies at a height of 3000 meters and the trekking enthusiasts can go through remote villages, picturesque meadows, vast fields and ancient monasteries.
Also known as the Gangtey Gagona Trek since it takes you through the isolated valleys of Gogona, Phobjikha and Gangtey Gompa, this trekking route can take you through some mixed bamboo and fir forests, cultural Dzongs and museums in Paro and Thimpu. The valley lies to the east of the Wangdue Phodrang mountains and is also home to the rare black necked cranes that migrate here during the winter season and can be spotted during the winter treks.One can also visit the Taktshang monastery which is held in high esteem by all Buddhists. The trek also covers the Gangteng Gompa monastery which is part of the Nyingma sect of Monasteries that is nestled in the black mountains.

Day 1
DAY 1: Arrival at the town valley of Paro.

Our representative arranges for the Pickup from the Paro International Airport and the drop to the designated Hotel.

A short afternoon visit into the town of Paro is possible if there is time left after checking into the allotted Hotel.

Day 2
DAY 2: Sightseeing around the town of Paro.

A hearty breakfast on day 3, will be followed by a trip 8 kilometers north, to the Tiger’s Lair or The Tiger’s Nest also world famous as the Taktsang monastery which is perched on a steep cliff 900 meters above Ground level. The 4-hour trek, with lunch at a nearby cafeteria is famous for Guru Rinpoche (also known as Guru Padmasambhava) having meditated here for a period of 3 months on top of a tigress.Noontime is for exploring Thimpu the capital city which is 60 kilometers away. The day finishes with dinner at the hotel.

Day 5 involves crossing over the Dochula pass which showcases the Himalayan summits at a distance and then halting at the Wangdue Phodrang fortress for some sightseeing and exploring.

The trekking time covers 6-7 hours with a stopover at Tselela Pass for a lunch break from where you can get a great view.The trail takes you through Pine forests, quaint Villages, chortens, gushing rivers and small wild animals till we reach Gogona village where the local dialect of the nomads known as Jobkha is frequently spoken.

This is another challenging but beautiful trek which involves a gradual climb with a stopover at Shobju La at 3400 meters for a much deserved lunch.This is the highest point after which there is a descent into the village of Khotokha which is in the sacred district of Wangdue Phodrang and transports you into a scenic and magical environment.

Day 8
DAY 8: From Khotokhato Chazam (3000 meters)ending the trek in WangduePhodrang

The trail passes through the Mulaila Pass at 9200 feet taking you through a spectacular view of the Himalayas where you officially end the trek at Wangdue Phodrang. Water is a scarcity here and needs to be conserved while the evening ends with an overnight stay at a designated Bhutanese guesthouse.

Day 9
DAY 9: From Wangdue Phodrang into Punakha and finally into Thimpu

Day 9 covers some more sightseeing with a visit to the Punakha Dzong that was built in 1637 and lies at the confluence of the Mo Chu and Pho Chu rivers.Apart from it being the official Winter Residenceof the Buddhist Monk body,you can also enjoy the snow capped mountains while you meander through the 76 kilometer drive back into Thimpu.

At Thimpu we are further free to do some more sightseeing and to take in the scenic beauty. Lunch is eaten back in the town of Paro after a lazy drive covering around 56 kilometers. We wrap up the night back at the Hotel.

The Departure would be after some breakfast, with our company representative arranging your drop-off at the Paro International Airport, for you to proceed further.

Bhutan 11 Days
Available through out the year