The Sagarmatha National park is a pristine area with diverse valleys, Himalayan glaciers, and mighty mountains. It is home to the highest peak in the world i.e Mt.Everest and many other peaks.

Situated at 135 km from Kathmandu, this park is the gateway for the Everest expedition and several treks in the Everest region.

The park is rich in different species of vegetation and wildlife. Hence visiting this park will help in uplifting the ecotourism.

Moreover, with an elevation ranging from 2845m to highest summit 8848m, it is the highest national park in the world. The world’s biggest Ngozumpa Glacier lies just below the 6th highest mountain, Cho Oyu.

The capital of Sherpa, Namche Bazaar in the park, is one of the main hubs and the gateway to Mt. Everest.

Everest mountain flight to this region will give you exotic mountain views. However, Everest Base Camp and Mt. Everest expedition are the two most famous activities inside the park.

The word Sagarmatha is a Nepali word. “Sagar” meaning sky and “matha” meaning the head. The park was established in 1976. And it became the first national park in Nepal which is enlisted as a natural world heritage site in 1979.

The park is a protected area in the Himalayas of eastern Nepal. And it spreads in the area of 1,148 sq km in the Mahalangur ranges.

The park shares the international border on the north side with Qomolangma National Nature Preserve of Tibet. And in the south, it extends to Dudh Koshi river. It contains upper catchment areas of the Dudh Koshi river, Bhote Koshi river basin and the Gokyo lakes.

The park largely comprises of rugged terrain and gorges of high Himalayas. Besides Everest, the park comprises peaks such as Lhotse, Nuptse, Cho Oyu, Thamserku, Ama Dablam, and Pumori.

Today the Sagarmatha National Park is one of the most visited protected areas of Nepal. The inhabitants of this area are mostly Sherpas. And most of them are in the tourism business like porters, guide, hotels, and lodges.

The villages in this region follow their own kind of culture and custom. Despite being a very touristic center, it still holds the traditional charm of their lifestyle, language, or costume.

For all these features, this region is a popular destination for many tourists all around the world.

One can witness distinct variation in vegetation in Sagarmatha National park. Located in the Himalayas, Sagarmatha National Park is very rich in biodiversity. Above the elevation of 5000m, 69% is barren land, 28% is the grazing land and the remaining 3% forested.

The forests of lower altitudes are full of rhododendrons, birch, juniper, blue pines, fir, and bamboo.

In the higher altitudes, you will find dwarf shrubs. As the altitude rises, the vegetation gets limited to mosses and lichens. However, above the elevation of 5750m, there is no vegetation as it is the permanent line in the Himalayas.

There is a forest of pine and hemlock in the lower elevation of the park. And at the elevation of 3500m and above extends the forest of Rhododendron, silver fir, juniper, and birch.

Rhododendrons starts to bloom in late March and stay colorful and vibrant till September.

There is a wide range of wildlife inside the Sagarmatha National Park. There are at least 118 species of birds inhabiting in the park.

They include blood pheasant, Himalayan Monal, Red-billed Chough, and yellow-billed chough. This is the reason why Sagarmatha National Park is an important bird area.

There are also some rare species of mammal such as Himalayan Tahr, Musk deer, Ghoral, snow leopards, red panda, wolves, lynx, and weasels.

As the altitude increases, the level of temperature and oxygen decreases. Hence the animals living at a higher altitude region adapt to living on less oxygen and cold temperature. Those animals have very thick fur to keep themselves warm.

Climate and the Best Time to Visit Sagarmatha National Park

Sagarmatha National Park has a climate that varies from semi-arid subtropical to temperate type with medium to heavy annual rainfall.

Summer month have a moderate temperature. While July to September witnesses heavy precipitation. Winter months, on the other hand, are extremely cold. And the temperature drops to -17 degrees in Sagarmatha region.

The best time to visit Sagarmatha National Park is from October to November and March to May. One should think twice before visiting this place from June to September. The place receives heavy rainfall, approx 1000mm which makes it difficult for hiking.

Winter months from December to February are extremely cold and snowfall is common during these months.

How to get to Sagarmatha National Park? 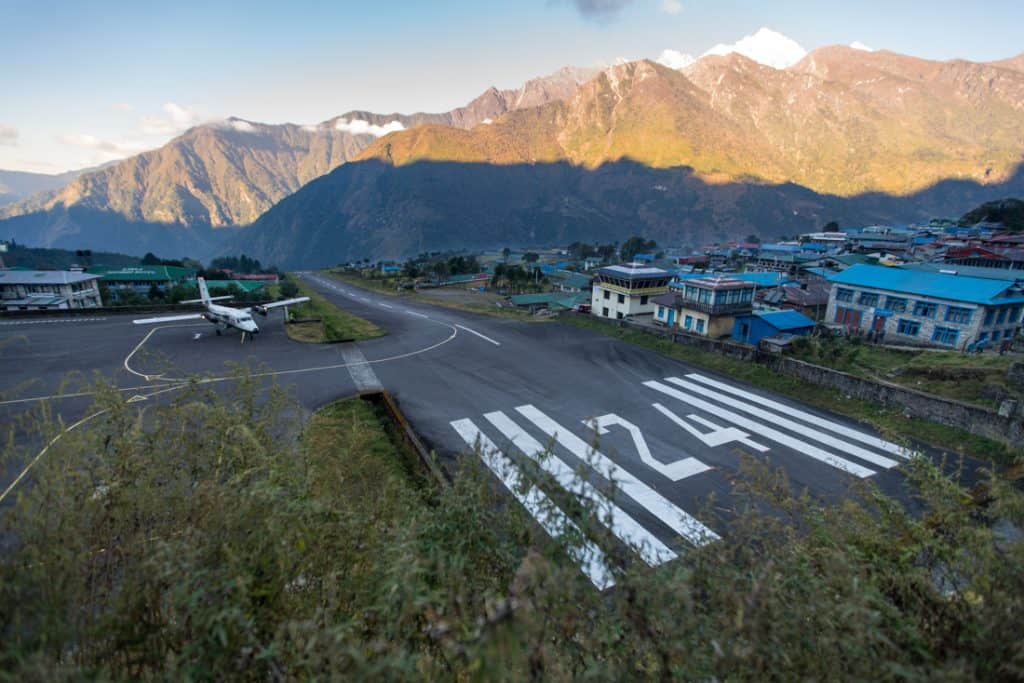 Sagarmatha National Park lies in a remote location and getting there is quite a challenge. The nearest air connect is the Tenzing Hillary Airport at Lukla.

The airport is one of the most extreme airports in the world with an altitude of 2,860m between the mountains.

From Lukla, one can trek up to the National Park. The trail is steep, rugged yet, exciting.

Or, you can take 8 hours drive to Salleri by the ground vehicle while exploring the lower valley of the Khumbu region.

Entrance Charges for the Park

For the entrance, you need to buy an access pass from the visitor center for Sagarmatha National Park.

The pass is free of cost for Nepali citizens. For SAARC countries, it costs Nrs 1500 per person plus 13 % VAT.

And for foreigners, it costs Nrs 3000 plus 13% VAT which is NRs 390 which make a total of Nrs 3390 per person per entry. You need Passports to issue the access pass.

As for the timing, the scenic park remains open for 24 hrs for tourists convenience. But it is advisable to visit the place before sunset. Hiking and trekking in dark are a bit risky due to the presence of endemic wildlife.

There are numbers of good lodges, internet cafes, banks, police check, and trading centers. Many trekkers check-in the hotels in Namche Bazaar for different routes of Everest trek.

There are many facilitated mountain lodges. And tea houses with hot water shower beside Namche Bazaar.

You can find proper accommodation facilities at almost all the places. Phakding, Thame, Dole, Syangboche, Dingboche, Khunde, Khumjung, and Gorakshep are some stops during while exploring inside the Sagarmatha National park.

There are various places you can explore while visiting the park. Down below is the list of places you can visit near the park area. These places are definitely worth a visit.

Namche Bazaar is one popular tourist hub of this region. Thousands of tourists who are going for Mt Everest expedition or to Everest Base Camp stay in this famous place. It lies at an elevation of 3440m in Solukhumbu district.

This place is the main trading center in the Khumbu region with many Nepalese officials, banks, post, and a police checkpoint. Here, the locals that are the Sherpas are mostly engaged in the tourism business.

Namche Bazaar is the gateway to the Himalayas. It is a popular acclimatization spot for the trekkers before heading to the higher altitude region.

There are many hotels and lodges, internet cafe, shops which serves everything you need like trekking gears. 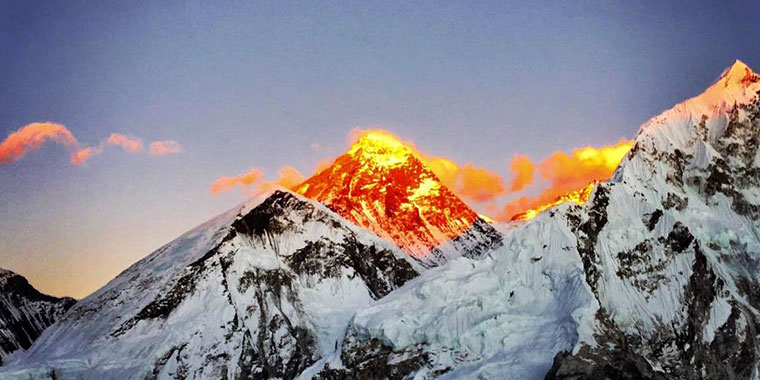 Mt.Everest is a magnificent peak and an attraction of the park. Climbing Mt. Everest is a dream for many.

One can take on the Mount Everest expedition by two different routes, one from Nepal and the other from Tibet.

Besides summiting Everest which is rather difficult, Everest Base Camp Trek is quite popular too. It is, in fact, one of the most popular trekking routes in the world.

This trek has challenging trails, splendid views of the peaks. And, villages which have distinct culture and tradition that adds diverse experience to the trekkers in this region.

Tengboche Monastery is one of the oldest monasteries in Nepal of the Khumbu region. It is a Tibetan monastery of the Sherpa community. It lies amidst the Sagarmatha National Park.

It offers the magnificent panoramic view of the mountains which includes Mt. Everest, Lhotse, Nuptse, Tawache, Ama Dablam and Thamserku.

Also, Tyangboche monastery hosts a festival called Mani Rimdu every October. During this festival, people gather and dance and sing around the monastery.

Khumjung is a small village that lies in the northeastern part of Nepal in Solukhumbu district. This village is in the sub-region of Khumbu inside the Sagarmatha National Park.

It lies at an elevation of 3790m near to the Mount Khumbila. Despite being a small village, it has many historical places to visit.

Along with this school, Hillary also founded a hospital in Khunde which is next to Khumjung.

The Khumjung monastery is also a very popular site of this village. Many tourists visit here to see the rare piece of Yeti scalp.

The Khumbu Glacier is a very exciting landmark within the Sagarmatha National Park. The glacier is about 17 km long and is the highest glacier lying at an elevation of 4900m.

You can see this during the concluding days of your trek to the Everest Base Camp. Also, there is a large icefall called the Khumbu Icefall.

The Khumbu Icefall is a challenging spot yet a beautiful place. The icefall moves continuously with varying speed and sometimes leaves crevasses. Large ice blocks can also be a challenge for the trekkers.

The word Kala Patthar means Black Rock in Nepali. It lies within the Sagarmatha National Park and is the closest viewpoint of the Mt.Everest.

Located at 5545m above Gorashep, it is the highest altitude you will ever step during EBC trek.

One needs to experience a steep ascend before reaching this mesmerizing point.

It is not only the Everest, but the spectacular scenery of the snow capped Himalayan peaks and ranges you will get from Kala Patthar.

From Kala Patthar, the Everest Base Camp is only 2 km away. 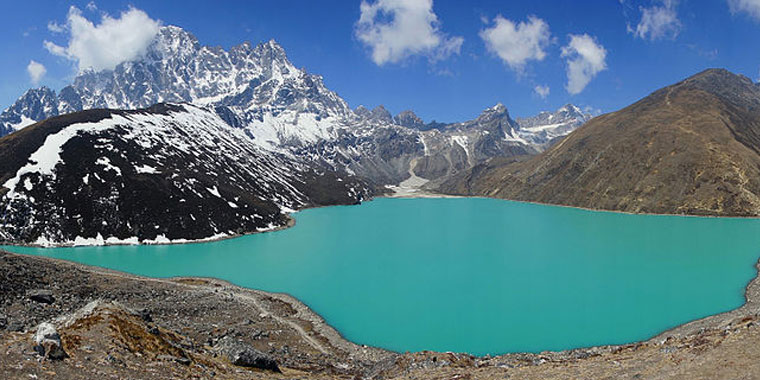 The Gokyo lakes are the highest lakes in Sagarmatha National Park with an altitude of 4700m to 5000m above sea level.

The lakes consist of 6 glacial lakes from which Gokyo lake is the main lake and Thonak Cho is the largest with an area of 65.07 ha (160.8 acres).

The lake systems are from various sources like stream coming through Ngozumpa glacier, the biggest glacier in the world.

You can also climb Gokyo Ri at 5357 m for a spectacular view of the lakes as well as the Mt. Everest and its terrains.

Sagarmatha National Park-home to Mt. Everest is an area with immense natural beauty. The diversity there is vibrant. It oozes with both natural as well as cultural diversity.

Also, there are various trekking options to the Base Camp. You can choose to reach the Everest Base Camp via Gokyo Lakes or go for a more adventurous trek reaching the Island peak and Everest high passes treks.

No wonder this region receives thousands of tourists every year.

For further question and queries, please feel free to contact us. It is our pleasure to guide and assist you with the best of our knowledge. 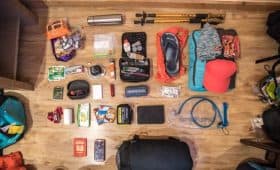 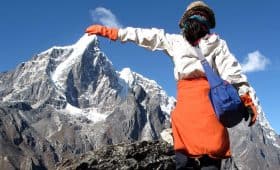 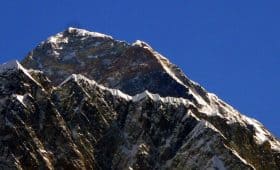 How Difficult is Everest Base Camp Trek