Bhutan is the Buddhist Kingdom, known for its dramatic landscapes and beautiful monasteries.

Bhutan in October offers you a sublime view of mountains with the lush scenery all around. It is the most visited time of the year as the weather is just perfect and the visibility is absolutely clear. During October, the number of visitors surges, as a packed calendar of cultural and religious events gets underway.

During October, the scenery is just beautiful. You can see the valleys turned into a shade of gold as rice farmers prepare to harvest their crops.

Many travelers also arrive for the festivals during this month. These festivals give you an authentic experience.

Accommodation and air tickets will be intense during October. Therefore, you are suggested to plan your trip to Bhutan in October in advance and make sure you get hotels and flights arranged.

Weather and Climate of Bhutan in October

October is the start of the Autumn season and probably the best time of the year for a trip to Bhutan. It is a month characterized by pleasant temperature and mild weather.

It can get significantly cooler in the mornings and evenings. And at the highest elevations, there may be a hint of early snowfall. Whether you’re in the mountains, the valleys or exploring the forested regions of the country. Bhutan’s autumnal colors are beautiful everywhere. 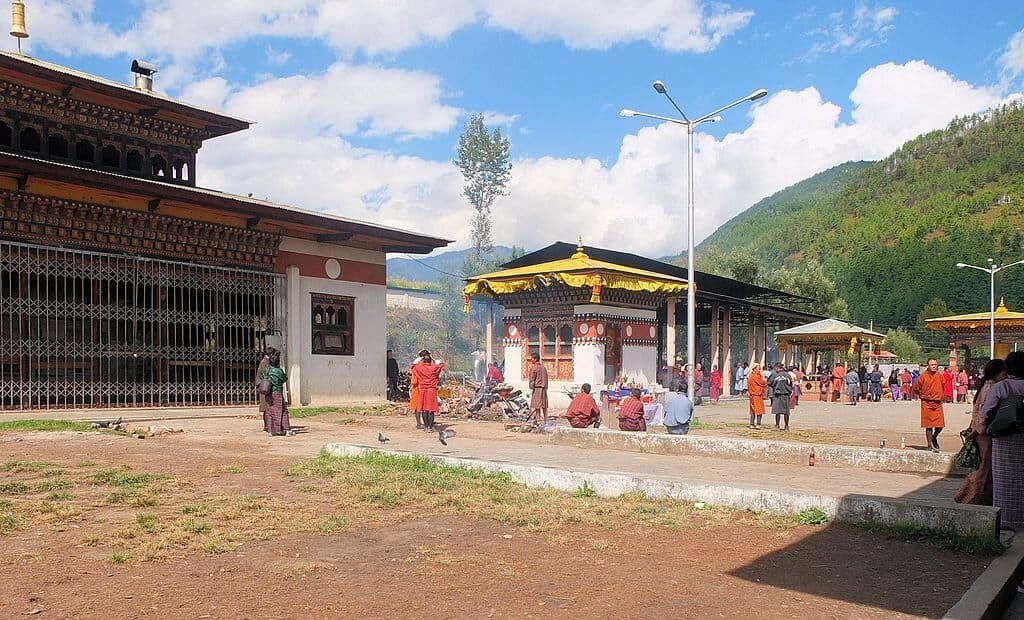 Thimphu is a capital city of Bhutan and lies at the lower altitude. That means this city has a subtropical highland climate. When you travel to Thimphu in October, you can expect occasional rain. And also high-temperature weather.

Paro is one of the attractive tourist destinations in the mountainous country. The weather is relatively cold and the temperature in Paro vary greatly. If you are planning to trip to Paro in 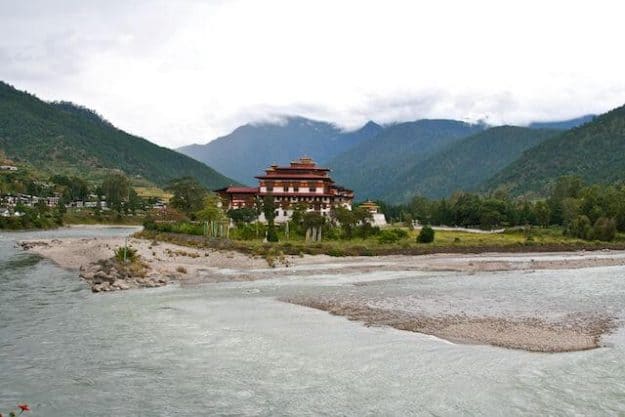 Punakha lies at an elevation 1,200 meters above sea level. Punakha in October experiences a pleasant and warm day with the heavily overcast sky. The temperature fluctuates around 22 °C with light breeze wind.

Festivals to Participate in October

Experiencing a festival in Bhutan is the best way to understand the meaning and symbolism that features throughout an event.

Some of the festivals which fall during October are: 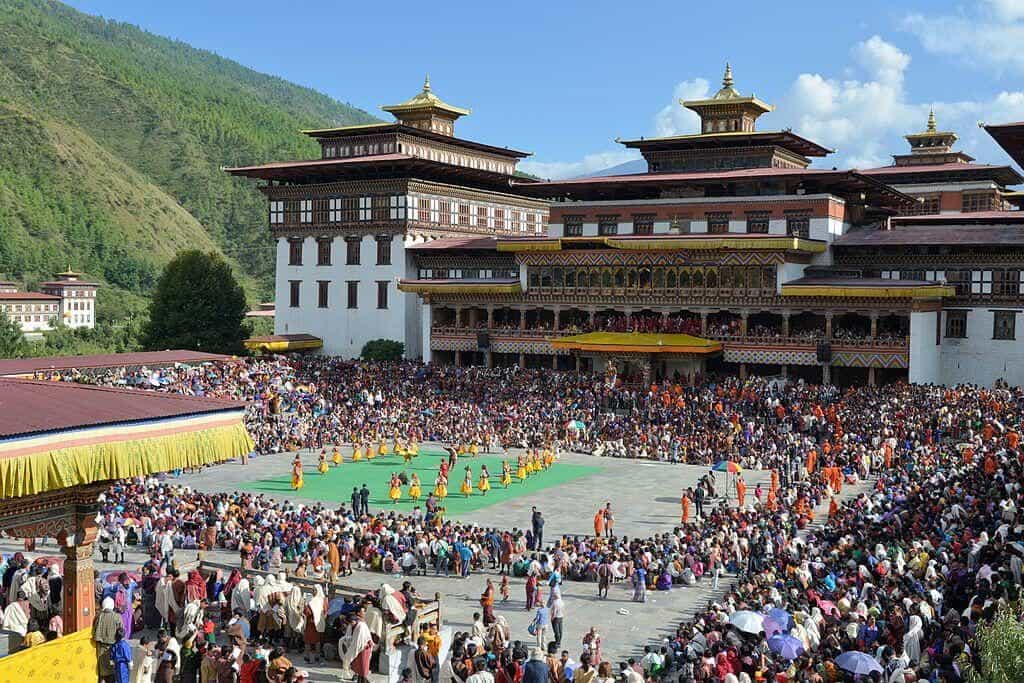 One of Bhutan’s largest festivals which takes place in the capital city, Thimphu. Literally, thousands of Bhutanese will travel from rural villages and from across the country to attend this festival.

The ‘Dance of the Black Hats’ and the ‘Dance of the Terrifying Deities’ are the most revered traditional performances. Aside from the festival, audiences also take great delight in watching atsaras. They entertain by dancing and fooling like jesters to mystify evil spirits.

Held in the Bumthang Valley, Tamshing Phala Choepa Festival takes place in early October. The festival itself is particularly significant as it is set within the spiritual heart of Bhutan and centers on a temple.

Traditional mask and folk dances nearly always include the ‘Dance of the Three kinds of Ging’ and the ‘Dance of the Four Stags’. Both of which are being said to bring good luck and banish misfortune for all who watch.

Another popular Bhutan festival in Bumthang is the Thangbi Mani Festival which also takes place in October.

The Mewang fire blessing ceremony is often exciting with leaping over flames in order to purify themselves. Alongside numerous masked dances and further purification rituals performed by monks.

Thangbi Mani is set against a backdrop of the full moon and features some unique traditions. Like, throwing of dough balls and offering buckwheat noodles to guests.

Foods in Bhutan in October 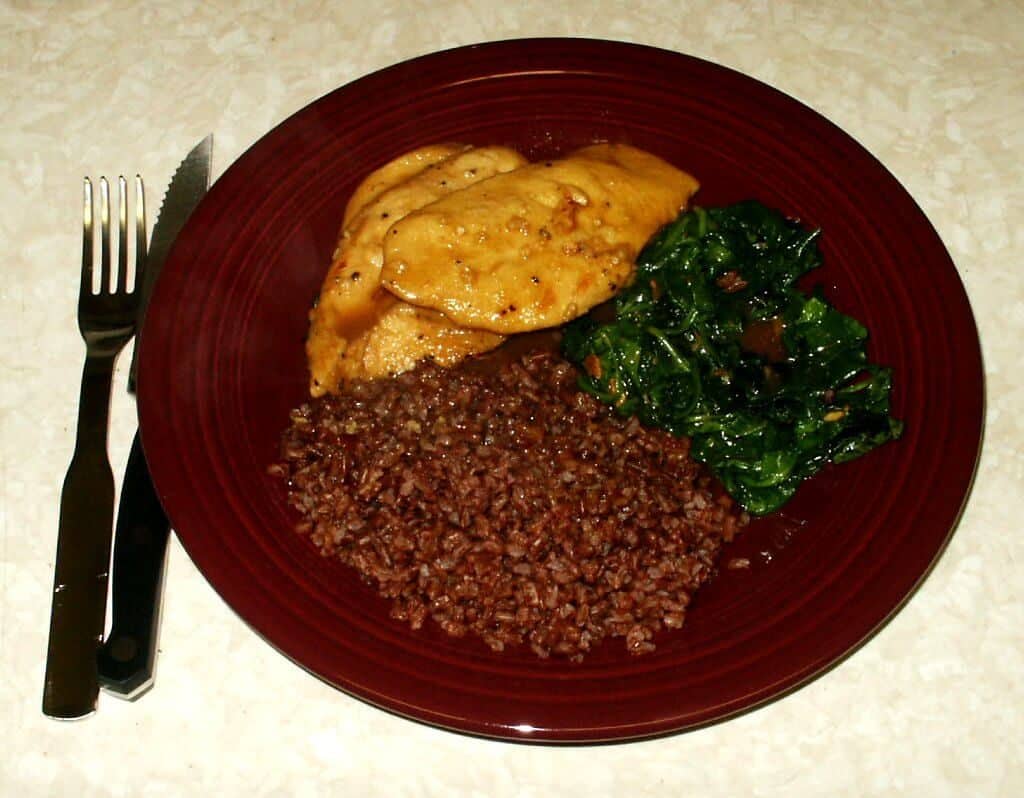 Bhutan serves a variety of cuisines such as Tibetan, Chinese, Nepali, and Indian. These cuisines are usually served for travelers seeking for familiar tastes. However, the country itself has its own distinct as well as delicious food.

Some of the special dishes of Bhutan are:

Tshoem: A spicy curry made with beef and mushrooms.

Best Places to Visit in Bhutan During October

The capital and charming city in the kingdom, Thimpu nestles in the beautiful Himalayas. It is a city which is an example of a remarkable architectural structure.

Most commonly, this place is also called “the fortress of glorious religion”. Interestingly, it is the only city in the world with no traffic lights.

The top attraction of Thimphu for visitors is Tashichho Dzong. Along with the National Memorial Chorten and Motithang Takin Preserve. 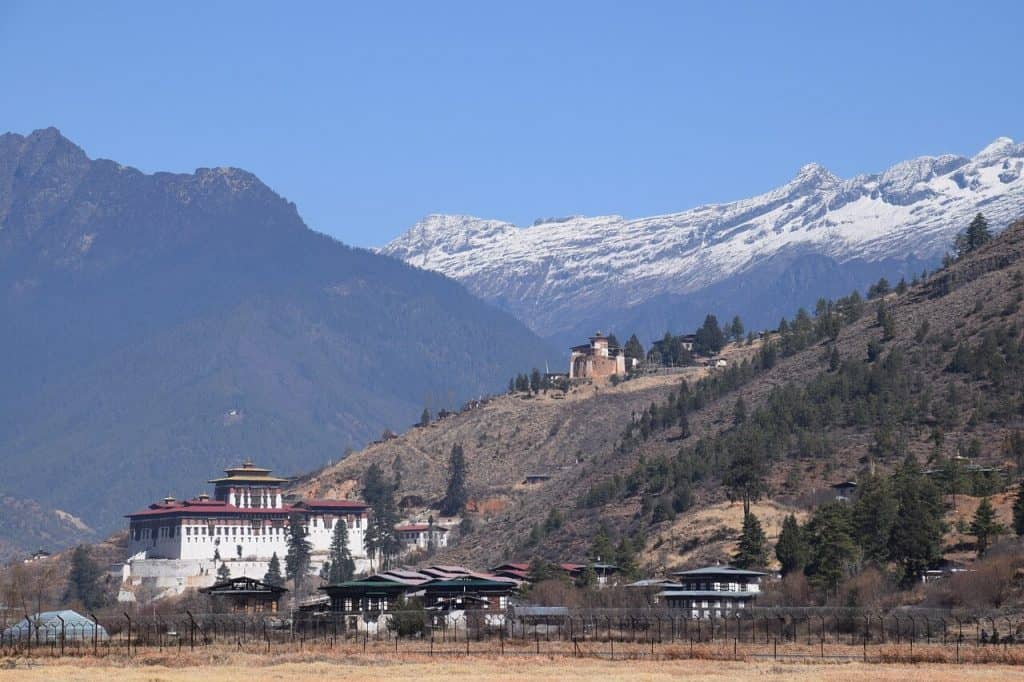 Paro is set in the gorgeous valley with a beautiful view of lush green rice fields. It is one of the must visit place in Bhutan.

Craggy mountain hills, serene beauty and the clean air make a peaceful atmosphere to travel in Paro. Rinpung Dzong is one of the finest examples of a Bhutanese monastery which attracts most of the visitors.

The Dzong hosts the Paro Tsechu i.e festival of masks. Beyond this, the National Museum of Paro exhibits rich stamp collections and slate carvings. Along with Thangka paintings, traditional weapons, and other articles reflecting Bhutanese culture.

Punakha is the breathtaking destination in Bhutan. It is one of the most beautiful and significant regions at the heart of Bhutanese culture.

This district, leveling from 1300m at the valley floor rises to almost 3000m around Dochula pass. People visit this place mostly to understand Bhutanese history and to enjoy its natural beauty.

Punakha Dzong, Chhimi Lhakhang, and Liam Bhukha are the things you love to see in this beautiful area. 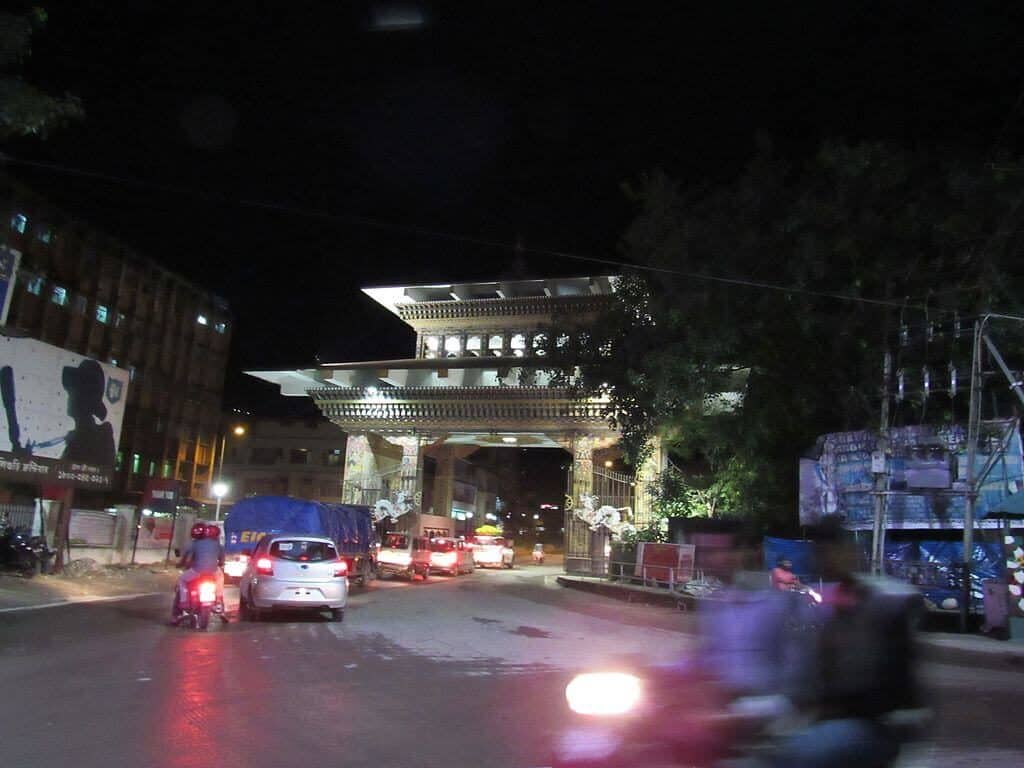 It is a small town in Bhutan with a clean and beautiful environment. However, like all of Bhutan, it does offer a clean, pleasant and safe environment.

The major attractions of Phuentsholing are Amo Chuu and the Crocodile Breeding Center, the Bhutan Gate, and Karbandi Monastery.

The natural beauty of Phuentsholing forcefully captivates you. It is a perfect place to visit for those people who love nature and want to remain in solitude.

Bumthang valley lies at an elevation of 2,600 meters and one of the religious places in Bhutan. It is full of most ancient and precious Buddhist sites and a religious hub for some of the old Buddhist temples.

Its undulating terrain is almost filled with apple trees which attract the visitors. Also, numerous temples make one of the delightful places to visit for tourists.

Phobjikha and Gangtey Valley, both the places are also must see places in Bhutan. These are glacial valleys with a stream flowing through their open grasslands.

These places are the most beautiful landscapes in Bhutan. It is home to the endangered black necked-crane along with diverse species of flora and fauna.

The drive among Dochula Chortens and Rhodos is mind-blowing. The entire region is also called the Gangtey valley. Gangtey Monastery and Jigme Singye National Park are famous among visitors in the region. 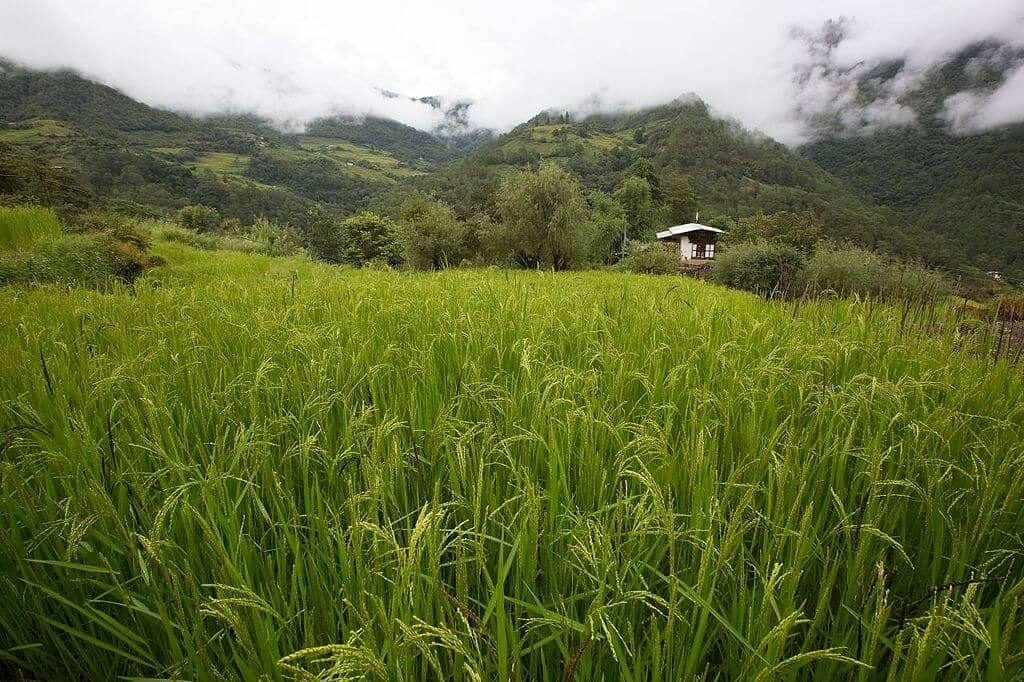 It is another must-visit place in Bhutan. This place is famous for its fine bamboo products, slate and stone carvings.

The Dzong is open for visitors during Wangduephodrang Tshechu celebration in October.

Mongar and Lhuntse are the two places mostly preferred places in Bhutan by travelers.

Mongar lies in eastern Bhutan. The journey to Mongar is one of the most beautiful journeys in the Himalayas, crossing 3800m high Thrumshingla.

Likewise, Lhuntse at the elevation of 1460 m is a very rural and isolated district in Bhutan. The kurtoe region of Lhuntse is the ancestral home of the Royal Family.

Trekking in Bhutan in October

Besides traveling to the beautiful cities in Bhutan, you can also consider trekking during October.

The most popular season for trekking in Bhutan is in October. As this is the warmest period and also coincides with many of the major festivals that Bhutan is well-known for.

Temperatures are at their warmest in the eastern parts, however, as you ascend in altitude, temperatures do drop. The mountain peaks are snow covered all year-round and temperatures rise high in the peaks.

Thus, the mild weather in October makes a perfect time for trekking to Bhutan. 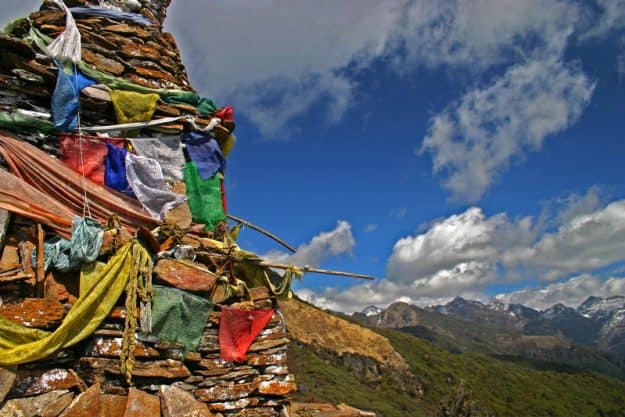 The three most popular trekking routes in Bhutan are:

All three treks offer something very different in terms of landscape, difficulty, and altitude.

Tips for Bhutan Travel During October

Packing and Dressing During Your Bhutan Trip

Bhutan has a warm climate and mild weather in most of the areas. So, you should pack and dress accordingly.

Also, Bhutan is a religious country full of monasteries, fortresses and sacred religious sites. Thus, long pants and long-sleeved tops should be usually worn to show respect while visiting those places.

Warm clothes are also needed for high-altitude areas. As for trekking, a pair of comfortable and durable shoes are highly recommended.

Book Your Bhutan Tour in Advance October is the peak month to visit Bhutan. So, air tickets and hotels would be quite tense during peak season. For this reason, you are highly suggested to confirm your Bhutan travel months earlier. Thus, do book your Bhutan Tour in advance.

In Bhutan, most visited places are at lower elevation although the large area of Bhutan is mostly covered with Himalayas and mountains. However, you don’t need to worry about the high altitude sickness during your Bhutan trip.

If you are going to places at high altitudes, you are highly suggested to acclimatize yourself. And also have a good rest, keep warm and follow the advice from a tour guide.

Bhutan in October offers the best weather, rich festivals, monasteries with a clean environment. There are minimal rainfall and nature is equally majestic and rewarding at this time.

October is the time of a lot of festivals in Bhutan, where each place has something unique to offer to its visitors. The festivals are richly marked by indigenous faiths, customs, and traditions.

Besides this, you will be amazingly thrilled by the Bhutanese hospitality and with their delicious cuisines.

In fact, Bhutan in October is the best getaway for families, adventure, and nature lovers.

For further information and queries, please feel free to contact us.