Nepal, known for its beauty, diversity and the majestic Himalayas is the perfect adventure spot. People visit the country to enjoy their vacations, learn more about the unique country and its culture and mostly to quench their thirst of adventure.

Nepal provides a unique opportunity to either trek to various regions for the view of some of the highest mountains of the world or even the ultimate chance to mount them.

While conquering the highest mountains in the world is a dream for all mountaineers and many have made history by traveling to these regions and even to the highest peaks, not all succeed. There are times when we hear about all these brave, adventurous mountaineers on the verge of making history, but tragically face disasters and some, unfortunately, even death.

One of such tragedies happened recently – on 14th October 2014. Termed as Nepal’s worst trekking disaster, the avalanche took at least 40 lives while hundreds were injured.

October is the best season for trekking in the Himalayan region when the monsoon clears leading to a mesmerizing panoramic view of the mountains; there were thousands of trekkers around the regions with 110,000 foreign tourists reaching the Annapurna area in 2013.

The disaster occurred in and around the Dhaulagiri and Annapurna, in the Manang and Mustang districts within the Himalaya range. The exact point of the disaster is the Thorung La Pass, the highest point of the Annapurna Circuit trek.

The trek is approximately 241 km (150 miles) that takes around 21 days to cover. It is considered as one of the best “long distance treks” in the world and also as the apple pie circuit as the teahouses in the route provide many baked foods. The circuit was opened after 1997 when the political conflict was resolved. It ascends to a total height of 5416m at Thorung La pass.

The highlight of the circuit is the Annapurna Mountain (world’s tenth highest mountain) and also one of the hardest mountains to summit.

The main cause of the snowstorm, as well as the avalanche, is believed to be the cyclone “Hudhud”, a very severe tropical cyclone within the North Indian Ocean that affected parts of both India and Nepal. While the cyclone caused deaths in Andhra Pradesh of India, it is responsible for causing the nonseasonal rain in the southern parts of Nepal and the unexpected blizzard that caused the avalanche responsible for the devastation in the Annapurna region.

The actual incident occurred in the morning of 14th October when the snowstorm led to a series of avalanches on and around Annapurna and Dhaulagiri mountains. According to some witnesses and experts, the storm was the worst of a decade and that 5ft 11 inches of snow had fallen over 12 hours.

Among those feared to be dead, most trekkers were from Canada, Israel, Nepal, India, Poland, and Slovakia along with the local guides and yak herders. There was light snow in the morning, but the trekkers continued anyway as the guides approved.

When the snowstorm finally hit, everything was white and blinding and the trekkers could see nothing. The deaths were caused due to the cold, snowfalls and the avalanche that buried the bodies deep into the snow.

Even the ones who survived suffered badly – many with severe frostbites that would require the casualties to amputate their limbs. Many were still missing for days as rescue operations were halted by the weather as well as the trekkers being trapped at elevations that are harder for helicopters to reach.

The delay in the rescue is suspected to be the reason for so many deaths, missing people as well as the injuries of the survivors as they had to stay in such cold without proper shelter, warmth or food.

The rescue operation took several days and without the proper records of the trekkers, guides and others in the disaster-hit area, their families had to go through difficult times, not knowing whether their loved ones had survived, were only missing or already lost their lives to unpredictable nature.

The tragedy was one that shook the entire world as trekkers of so many nations were involved in one of the most popular adventure spots in the world.

The search and rescue teams of Nepal Army were able to rescue 289 people on 18th October and 8 Nepali guides on the 19th of October. Two ministers were involved in the rescue operations to coordinate and monitor the actions and a control center was established in the Tribhuvan International airport.

Nepal, being a developing country with poor infrastructure,  has always been a difficult task to predict and then notify the changing weather conditions in the rural parts of the country like the Annapurna region.

However, an efficient weather forecasting system, as well as systems to give warnings on time, could have saved more lives, though the inexperience, inadequate equipment as well as traveling without guides might also be responsible causes for the deaths.

Nepal is a developing country and relies highly on the revenues earned from the tourism industries. Thousands of trekkers who visit the Himalayan region are a great source of income and pride for the country of the Himalayas. Such a trekking disaster in such a peak trekking season comes as very sad news for the loss of lives as well as the inefficiency of the Nepalese to serve and protect their guests.

The government, along with the Nepal Tourism Board has pledged to make amends and better infrastructures to ensure no such tragedies occur again. The Nepalese government, along with the other authorities have informed their plans to update the weather warning systems, make better emergency shelters in such disaster-prone areas and to keep proper records of all mountaineers and other involved in treks with mandatory registration at checkpoints.

Hopefully, such initiatives will prevent any future tragedies and establish Nepal as a safe and secure, adventure destination for all mountain-trekking lovers.

At present, you can find many checkpoints that keep record and checks after the arrival and departure of the trekkers in the region. Plus, our guides are much experienced and well-trained to help you keep safe during the time of unexpected natural occurrences.

And, the trails are made much safer for the trekkers. So, you do not need to fear at all. However, you should come to Nepal well-prepared to encounter positively any mishaps that may occur in the route.

We express our condolences and prayers to family and friends of one who lost their lives in an avalanche in the Annapurna region. 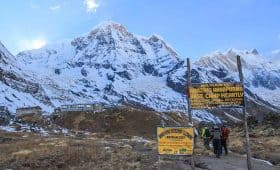 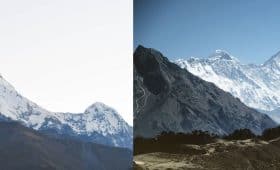 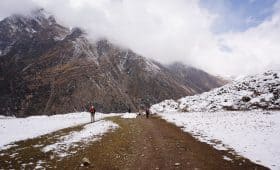