For avid trekkers, trekking in Nepal is possible at any time of year. Nepal has four major seasons: Autumn, Summer, Spring, and Winter.

Visitors arriving in Nepal have different purposes. Most of them come to enjoy mesmerizing landscapes and Himalayan views. Others wish to experience the love and hospitality that Nepal and Nepalese has on offer. Some of them visit for study and research purposes as well.

Annapurna Base Camp trek is among the most popular treks in Nepal. Thousands of trekkers visit this region every year to enjoy its priceless beauty.

In this article, we have covered everything you need to know about the best time to trek to Annapurna Base Camp.

Spring (March to May) 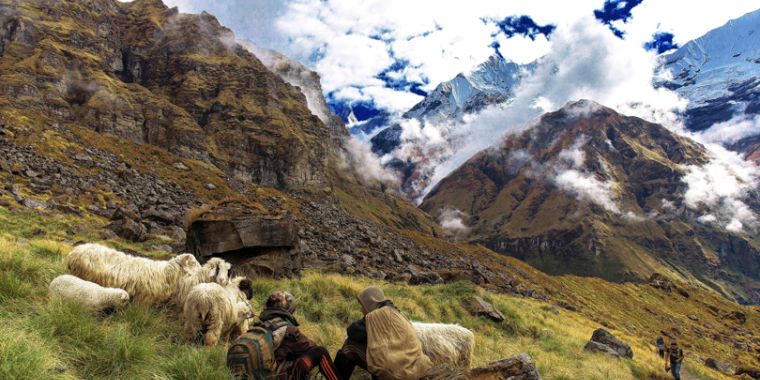 Spring is considered to be the peak trekking season in Nepal. According to stats from Nepal Tourism Board, a whopping 27% of total visitors come to Nepal during this time of year.

This data depicts Spring as the most favored period for trekking in Nepal. Spring has weather conditions quite similar to that of Autumn. The weather is good with a clear sky and excellent visibility.

Annapurna Conservation Area, this is where Annapurna Base Camp is, comes to life during this time. Trekking during this time is pleasant. Forests and surrounding hills are gorgeously green. Clear visibility provides views of glorious peaks like Annapurna massif, Machpuchhre, Himchuli, Gangapurna and many others.

In the higher regions, snowfall is common during early Spring. While the chances of rainfall are less, there is occasional snowfall during night time but starting April snowfall is less likely to happen. From May, you should expect some occasional light rain (drizzles).

Spring is the time when Nepal celebrates the New Year according to its traditional Nepali calendar. Plants grow, and flowers bloom during this time. It is also breeding season for some animals. There’s a new wave of energy flowing during Spring. Nepal celebrates other festivals like Holi, Bisket Jatra, and Ram Navami during Spring season.

Pros of Annapurna Base Camp Trek in Spring

Cons of ABC trek in Spring 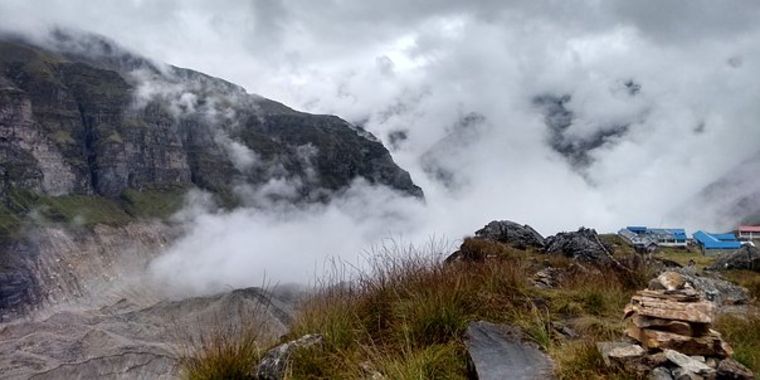 The summer season in Nepal is also the time for monsoon rain. So basically, this is the hottest and the wettest time in Nepal.

June starts cold gradually getting hotter. July marks the transition month between Summer and Monsoon.  August is the wettest of all.

Visibility is low during the day with clouds covering the surrounding. Trekking forest trails in monsoon might be a risky thing as the trails are slippery and prone to landslides. Besides, leeches and mosquitoes (at lower elevation) make it bit uncomfortable. Annapurna Base Camp trek involves trekking through the forest for most of the trail.

The mornings are bright though. It usually rains during the night. This results in a clear sky and excellent visibility in the morning. The temperature and precipitation both are high in the lower regions. At higher altitudes, things are better than in the lower areas during monsoon.

Climate Table for ABC in Summer/Monsoon

Pros of ABC trek in Summer

Cons of ABC trek in Summer 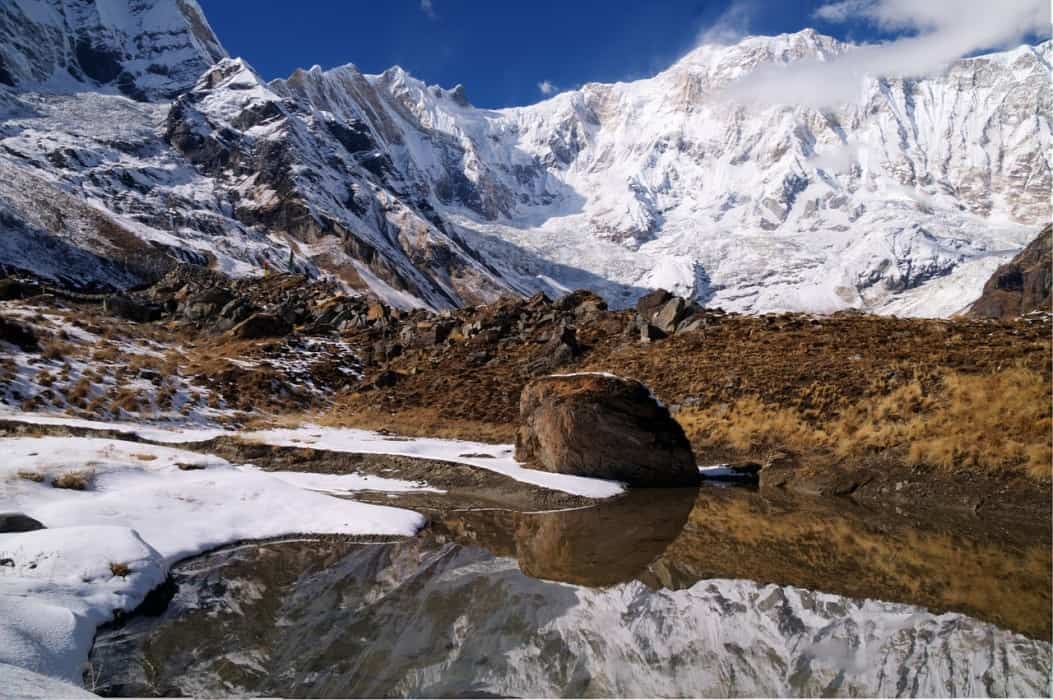 The best time to trek Annapurna is undoubtedly in Autumn. Between September, October, and November Nepal welcomes a considerable number of trekkers.

32% of the total number of trekkers visit the Annapurna Conservation Area during this season according to Nepal Tourism Board.

During early September, there are still chances of rainfall. It gets drier by the end of September.  October is the best month for trekkers. The temperature is warm, making it comfortable for walking in the day time. Whereas the mornings and nights are perfectly chilly.

By the end of November, the winter season shows its effect resulting in lower temperatures at higher altitudes. Clear visibility offers stunning views of peaks like Annapurna mountain range, mount Machapuchhre, Himchuli, Gangapurna and many more. Forests and Flowers add beauty on the trail.

Major festivals in Nepal fall during this time. There is a joyous environment all around. You will experience the local culture and traditions closely.

Climate Table for ABC in Autumn

Pros of ABC trek in Autumn

Cons of ABC trek in Autumn 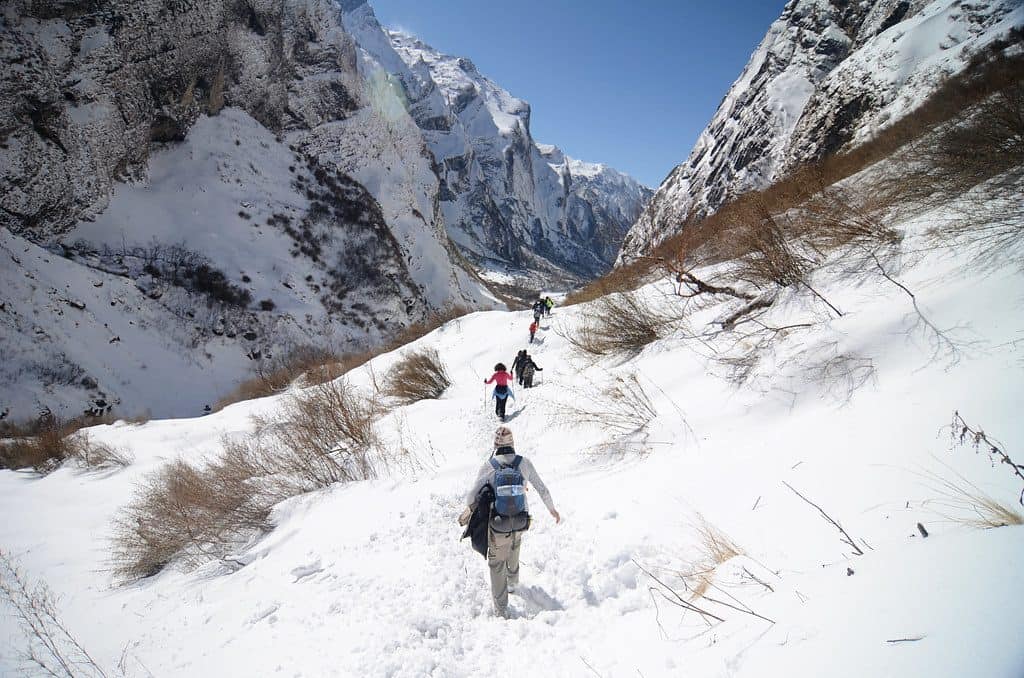 Fortunately, the Annapurna Base camp remains open throughout the year. The temperature during this time of year is freezing cold in the higher regions reaching way below zero degrees. But, with proper preparation, this trek is still doable.

The precipitation during these months is relatively low. Chances of rainfall or clouds covering the sky are minimal.

The wind is an important factor too. During Winter, the speed of wind in the Annapurna Base  Camp region reaches as high as 38 kilometers per hour.

Shivaratri, Tamu Loshar and Udhauli are some festivals you might experience during Winter in Nepal.

Climate Table for ABC in Winter

Pros of ABC trek in Winter

Cons of ABC trek in Winter

Annapurna Base Camp trek is doable at any time of year. This trek has something new to offer in every season.

The best time for the trek depends on the purpose and preference of the trekker. For people who love to trek in less crowded trails, monsoon and winter seem ideal. But, if you want to trek during the peak season and enjoy the crystal clear unobstructed views, spring and autumn is the right time for you.